This was the first track and lead single from Blue Cheer’s first album Vincebus Eruptum and is one of those songs (along with Steppenwolf’s Born To Be Wild and The Beatles’ Helter Skelter, among many others) that sometimes gets credited with being the first heavy metal song.

They’re also often cited as big influences on grunge and stoner metal, and if you find yourself doubting that, check out the video – in particular Paul Whaley on drums – and ask yourself what grunge/stoner band wouldn’t want him behind them!

Blue Cheer came out of hippie-era San Francisco and were regulars at the Whiskey a Go Go at the same time as The Doors, but had much more in common with the Jimi Hendrix Experience and Cream. They were named after a type of LSD peddled by The Grateful Dead’s entourage and in their early days they played dirgey, atonal heavy blues-rock – this cover version being a prime example. 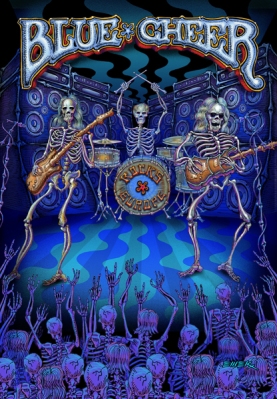 Sub Pop’s producer, Jack Endino drew parallels between Bleach-era Nirvana and early Blue Cheer when he first recorded the band (at a time when they were called Ted Ed Fred). It’s easy to see where he’s coming from; they’re both dealing in down-tuned, fuzzed-up riffs and snare-denting drums.

This is what makes their Summertime Blues cover appealing. Eddie Cochran’s original is a (brilliant) sparse, acoustic guitar and handclaps, Buddy Holly-style number about a clean-cut teenager, bemoaning the adults curtailing his innocent summer fun. Ten years later, three acid-fuelled maniacs at the heart of the Haight-Ashbury revolution are mocking this image of frustrated rebellion with free love, feedback and waist-length hair.

A short list of stuff you might not know about psychedelic, scatological, avant-garde, Texan, punk rock reprobates and legends, Butthole Surfers….

Magnificent Cover Version No.17, ‘The Model’ by Kraftwerk covered by Big Black

This was released as a single in 1990 and was included on the Surfers’ 1991 album ‘Pioughd’ – at that time their most accessible yet, by a distance. It builds from a finger-picked acoustic guitar line into a soaring, uplifting rock song that verges closer to straight up pop music than the band ever had before. It’s the bizarre vocal delivery that sets it apart though. It’s hard to tell if Gibby is using effects or his own unique skills, but it comes across like a trippy, vocal wah-wah – a typical, playful Butthole Surfers touch.

And yet, it’s NOT a Butthole Surfers touch; Donovan used the exact same vocal style in the original.  In fact the original is practically the same as the cover, except with sitars and slightly unsettling tone. There’s a theory that Jimmy Page and John Bonham were session musicians on the but nobody seems to be able to say for sure either way.

Butthole Surfers’ version of Sweet Leaf by Black Sabbath nearly made it on to the list, but it’s not really a cover, more a reimagining, retitled ‘Sweat Loaf’ to make that clear. It’s not as good as the original either, but it’s still great.

Carter USM did a lot of cover versions – most 12″s they released came with at least one, and loads of them were really good too. Highlights include Everybody’s Happy Nowadays by The Buzzcocks, Bedsitter by Soft Cell, Down In The Tube Station At Midnight by The Jam and This Is How It Feels by Inspiral Carpets. Their version of Alternate Title by The Monkees was a personal favourite, but Rent, the B-side to the 1990 single Rubbish, is widely held to be Carter’s classic cover version.

Carter used to cite Pet Shop Boys as one of their key influences, along with The Clash. At one time Carter’s merchandise included a t-shirt featuring a photo of Neil Tennant and Chris Lowe with the words ‘But Harder’ underneath. Safe to say they had t-shirts that sold a lot better.

Pet Shop Boys’ original version of Rent is a nice enough tune – a lightweight, synth-pop affair with a drum machine sounds that seems dated, even for 1987 – but it’s not up with the best efforts of their heyday like West End Girls, Opportunities and It’s A Sin.

Carter’s cover speeds it up, piles on the guitars and samples and brings it roaring to life, releasing the song’s potential and ramping up the drama of the subject matter. They even play with the lyrics to suit their style; the ‘restaurant on Broadway’ becomes, the ‘restaurant on Fulham Broadway’ – altering the one aspect of the song that doesn’t seem like it’s written for them. It’s an absolutely inspired cover.

Carter The Unstoppable Sex Machine were the first out-of-town band that I saw at my local music venue. I was 15 and had been going there for a few months, having initially been attracted by the opportunity to exploit the confusion that existed between door staff and bar staff as to whose responsibility it was to check the IDs of drinkers.

I’d never heard them before but their name rang a bell from the gig guide in Melody Maker. This wasn’t long after the release of 101 Damnations, so well before they were getting good coverage. Me and Millhouse took a chance, knowing that if the band were shit we’d be able to get a couple of pints of Skol anyway.

They were really fucking great. There were only two of them on the tiny stage and they were weird looking – one of them was tall and bony with a ponytail at the front of his head; the other wore a cap and shorts, like a Day-Glo Angus Young  – but they really went for it. There can’t have been more than 50 people at the gig but they played with total conviction from start to finish, coming to the front of the foot-high stage to sing, then surging backwards in unison, bent-double, slashing away at their sticker-covered guitars.

They had loads of great punk-pop songs, all beefed-up with drum machines and samples. They totally hooked me straight away – not just into their music, but into punk/indie/guitar/live music in general. Carter USM became my new favourite band and remained it for at least a couple of years.

I saw them a lot of times after that – at clubs around the country, high on the bill at festivals and at their spiritual home, The Brixton Academy. And whenever I saw them, these two weird looking guys with their backing track, they always gave a great show like they did from the start. 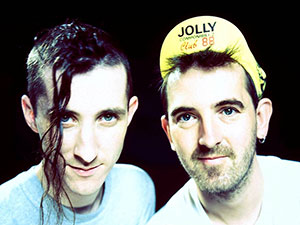 ‘Make Me Smile (Come Up And See Me)’ by Steve Harley & Cockney Rebel, covered by The Wedding Present – Magnificent Cover Version No.4

Minor Threat doing (I’m Not Your) Steppin’ Stone – Oh yes! Every version of this song is fucking great! You just can’t go wrong with that E, G, A, C chord progression.

It turns out it’s not a Monkees’ song after all – who knew? They made it famous but it was originally by Paul Revere & The Raiders.

I like The Monkees (not as much as Marge Simpson likes them, maybe), but I do like them a lot and I’m not afraid to admit it. Whether they wrote them and/or played them or not, they had some great songs, their TV show was awesome and I particularly love the fact that Mike Nesmith’s mum invented Liquid Paper/Tipp-Ex.

The Monkees’ version of Steppin’ Stone is a typical slice of their acceptably psychedelic bubble-gum pop, with Hammond organs, hand-claps, harmonies, tambourines and an uncharacteristically bitter sounding vocal from Micky Dolenz. Like most of The Monkees’ output, it’s bouncy, hippie-ish fun.

I like Minor Threat too – the definitive hardcore band and the polar opposite of The Monkees, in many ways.

Hardcore punk appeared in the late-70s, when the original punk rock scene was beginning to wane. Hardcore took the volume, aggression and speed of punk and refined it, making it louder, heavier and, above all, faster.

Black Flag were the single biggest drivers of this resolutely underground movement; touring relentlessly across the US with local bands from unfashionable cities, away from the cultural epicentres of LA and New York, in support. Washington DC was one of the least fashionable cities at the time, but its punk scene in particular thrived. This was ‘harDCore’ and Minor Threat were its star players.

Formed by Ian McKaye with school friends, their name came from the fact that despite their aggression, they were all minors (and small ones at that). For a lot of hardcore bands, speed was everything and while Minor Threat delivered that, they did it without compromising the power and heft of their music. They also reacted against the self-destructive overtones of punk, advocating a virtuous, straight-edge manifesto – no drink, no drugs, no promiscuous sex.

Minor Threat’s songs were ordinarily furious rants against social injustice, religion, violence or the normalisation of mind-altering substance use, so a Monkees’ cover (sorry, Paul Revere & The Raiders cover) seems quite unlikely. And that’s one of the things that makes a good cover version; when a band takes a song from a different genre, outside its comfort zone and gives it its own twist.

Minor Threat’s cover is a straight-edge, hardcore blast that starts fast and gets faster – though, in truth it lags behind a lot of their output in terms of tempo. The guitars and drums are thrashed out, McKaye barks out the ‘I, I, I’ part and there are certainly no Hammond organs or harmonies. There are though a few production tricks in there – the first part of the track is compressed before it opens up after a minute or so and there’s a reprise of the chorus vocals at the end. It’s nothing fancy, but it’s still unusual for MT to mess around like this and it all works great.

I love this Magnificent Cover Version. The original was wonderful and the cover is even better. I love the fact that The Monkees are a glossy, ’60s, manufactured, Technicolor, idealistic, mainstream hippie pop band while Minor Threat are a no frills, ’80s, back to basics, self-started, black and white, furious, underground, hardcore punk band. Two polar-opposite bands playing the same song and each coming up with something unique.

Sex Pistols also did a very solid take on it:

and The Farm’s 1990 baggy reimagining is well worth a listen too:

Minor Threat’s version is the best though.

The Sex Pistols covering ‘Substitute’ by The Who – Magnificent Cover Version No.29