In a 1995 interview, Devo founder Gerald Casale was asked to name the ultimate rock and roll song. Afer giving this due consideration for several moments he gave the perfect answer – Sympathy For The Devil by The Rolling Stones.

With this in mind, it’s worth reconsidering Devo’s quirky, ironic and iconoclastic take down of The Stones’ (I Can’t Get No) Satisfaction. It may be a barely recognisable reconstruction of the original, but it’s not a piss-take. It’s not a rejection of a classic, it’s an update. They even had to play it for Mick Jagger in person before they could release it as a single. He loved it.

Devo leave out the song’s central component, Keith Richards’ legendary riff, and replace it with bent guitar strings, jerky rhythm, stop/start beat and that agitated bassline. The vocal line is close enough to hint at the original but other than that it’s a complete reimagining of Satisfaction for a new era.

Resolutely looking to the future was part of the Devo philosophy.  It was also part of part of what separated them from their punk contemporaries. Devo didn’t like to be associated with the punk scene which they saw as musically and aesthetically backward looking. Their refusal to adhere to these accepted norms sometimes led to conflict, notably with The Dead Boys who attacked them onstage at CBGB. Devo’s beliefs were absolutely central to them and dated back to the inception of Devo as an abstract concept, long before they began dabbling in music.

As a student in 1970, Casale had witnessed the Kent State shootings and subsequent media reaction first-hand. Profoundly affected, he changed overnight from a pot-smoking hippie into an angry, politicised individual. It wasn’t until seeing David Bowie on his 1974 Diamond Dogs Tour that things began to make sense again for him and Devo was the result. In partnership with Mark Mothersbaugh they founded the artistic movement with the plan of combining the high ideas of classical art and literature with the crassest and most absurd elements of popular culture. This was a comment on what they saw as the de-evolution of mankind – the species having peaked, some way short of perfection and now heading steadily backwards – with the exception of themselves of course.

Casale and Mothersbaugh developed the idea in their physical art, short films and what would now be termed performance art. All the time they would consciously tread a fine line between appearing smart and stupid. They termed this ‘Ironic Idiocy’.

Both Casale and Mothersbaugh played music as a hobby – blues and hard rock, respectively. Eventually they began to think about what Devo music would sound like. Continuing with their commitment to ‘Ironic Idiocy’, they took their influences from Bowie, early Roxy Music and ‘bad TV and movie soundtracks’. A line-up which eventually included each of their brothers began playing music in a basement and recording it on four-tracks. It was several years before they performed live, by which time they had a large repertoire of original songs down, as well as their cover of Satisfaction. 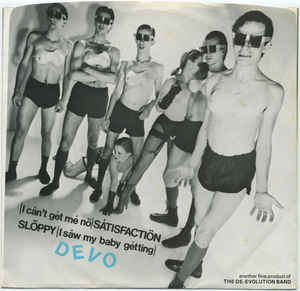 Eventually, one of their short films won a prize at the Ann Arbor Film Festival, which brought them to the attention of Bowie himself, who tipped off Brian Eno. While in New York, Eno took himself to Max’s Kansas City to see Devo performing their inimitable brand of high/low brow pop while dressed in matching janitor overalls, clear face masks and toy hard hats. Plans were made for Eno to produce their first album.

Devo flew to Cologne for the sessions with Eno. It was the first time they’d been recorded professionally. When they heard the tapes back they were appalled to hear themselves sounding like a real band, having spent so long trying to undermine real bands. Regardless, the result of this was their debut LP Q: Are We Not Men? We Are Devo!, a record which perfectly captures their obsessions and brought the band to the world’s attention.

For my money, the band peaked a couple of albums later with Freedom Of Choice, a masterpiece which featured the classic Whip It and the even more fantastic work of genius, Girl U Want. But Are We Not Men was a great LP in its own right and the cover of (I Cant’ Get No) Satisfaction became a minor hit single in the UK. In addition, Freedom Of Choice introduced their highly original sound and their unique viewpoint; knowingly merging the cerebral with the trivial and always looking forward. It took the astute and fertile minds of Casale and Mothersbaugh many years to fully develop this attitude and their idiosyncratic update of Satisfaction was a pretty good expression of it.

‘Girl U Want’ by Devo, covered by Superchunk – Magnificent Cover Version No.1

‘Quite simply, it’s one of the most powerful pieces of rock music ever recorded”. That’s the view of eminent music writer Michael Azerrad on Husker Du’s cover of Eight Miles High. Wow! I like it, but I’m not sure I’d go quite that far.

Me, Millhouse and a couple of other mates had a terrible band for a while. One of the reasons it was terrible was that we spent more time trying to think of a suitable name than we did practising. One of the names we considered was Husker Don’t.

And yet Husker Du wasn’t a band that any of us particularly listened to at that time. This being the early-nineties their influence on contemporary alternative rock was often discussed in the music papers and Bob Mould was just getting his excellent new band Sugar together, but none of us had yet gone back to the source.

Another eminent music writer Everett True credits Husker Du – along with The Replacements and R.E.M. – with inventing alternative rock in the eighties ‘by adding a soulful, melodic edge to their abrasive punk influences’. He calls their Eight Miles High cover ‘mind-blowing’. Just to clarify, for the purposes of this post ’eminent’ in the context of music writers means that they have their own Wikipedia page.

The Byrds’ 1966 original Eight Miles High was a classic example of their jangly, psychedelic folk rock and their last US Top 20 hit. Banned by radio stations for its drug references, the title and lyrics also refer to The Byrds’ flight to the UK for a 1965 tour and their mixed reception on arrival – adulation from fans, hostility from rivals. The song’s originality, fusion of Eastern and Western sounds and influence on psychedelic rock make it an important cultural touchstone of its era. In 1984 when Husker Du covered it, it was still a beloved artefact for ageing hippies. Which is exactly why Husker Du went for it.

Like many in the eighties US punk scene, Bob Mould had long been disillusioned with what he saw as sixties counter-culture’s betrayal of its own ideals, the pinnacle of which being the election of Ronald Reagan as president. Husker Du’s furious assault on a sacred hippie hymn was an attack on them and their treachery.

The cover replaces the dreamy pop jangle of the original with excessive volume, distortion and aggression. Mould’s guitar work is sublime, slashing out the melodies in searing, high-velocity metallic squalls. At the beginning of the track, his voice is an angry roar; by the end it’s a furious, throat-shredding, animal holler. Despite the cacophony, The Byrds’ tune remains audible, presaging the direction that the band would take in their next two, classic albums, 1984’s Zen Arcade and 1985’s New Day Rising, both of which would retain the volume of their earlier work but with melodies more clearly detectable within the torrent of sound.

When looked at in context, maybe those eminent music journalists have a point about the significance of this cover version. It’s not just a mid-eighties hardcore band fucking around with a song from a contrasting genre – it’s a blistering attack on the philosophical failure of a previous generation’s subculture and a landmark recording in the life of an important and influential underground band. The combination of punk aggression and pop melodies that started here would grow and grow before exploding in the next decade.

Magnificent Cover Version No.6 – (I’m Not Your) ‘Steppin’ Stone’ by The Monkees, covered by Minor Threat

Magnificent Cover Version No.2 – Happiness Is A Warm Gun by The Beatles, covered by The Breeders

Every time I see a golf ball, I think of Devo’s first album, Q: Are We Not Men? A: We Are Devo!  True story…

That wasn’t the joke, don’t worry, but it’s not much better than that, to be honest. Apologies in advance. Here goes.

This is my dog;

His name’s Devo, because he’s a whippet!

You know, because of their most famous song, Whip It? Yeah? Ah, if you have to explain it it’s never funny. Which I did warn you about.

Superchunk’s version of Devo’s awesome Girl U Want is the subject of this Noisecrumbs blog post. You should read one and listen to the other. It’s up to you which way round.