The Third Bardo were a psychedelic garage rock band from New York who were active in the late ‘60s and distinguished themselves from their contemporaries with their prominent Eastern influence. This infiltrated both the band’s name – a reference to Bardo Thodol; popularly known in the West as The Tibetan Book of the Dead – and their sound. You can hear this influence in the mind-expanding minor chords of I’m Five Years Ahead Of My Time and in its searing, needle-sharp guitar solo.

During the couple of years that The Third Bardo were active they managed the sum total of one recording session. Out of this session came six tracks, including I’m Five Years Ahead Of My Time, and its B-side Rainbow Life, which is considerably further out there than Five Years… and no better for it. Apart from having a Spinal Tap Stonehenge vibe about it, it lacks the grit and vehemence of the main track. A lot of the harshness and attitude on the A-side came from the ultra-confident lyrics, vehement delivery and sandpaper vocal chords of singer Jeff Monn.

The song stopped getting radio play when someone looked at these lyrics and leapt to the conclusion that they could be construed as drug-related.

This proved to be The Third Bardo’s one and only single release. Jeff Monn went on to release music as a solo artist, toning down the garage and psychedelia in favour of a more accessible, straightforward hippy sound, before re-emerging later with an album of entertaining blues rock under the stage name of Chris Moon with The Chris Moon Group.

The Third Bardo were in danger of being completely forgotten, but fortunately I’m Five Years Ahead Of My Time made it on to a 1979 Pebbles compilation of psych/garage rock and several such subsequent collections, which may or may not be where Monster Magnet got to hear it.

It’s a mystery to me why Monster Magnet never became huge in the ’90s. At that time their spaced-out, Sabbath riffing, supernatural and intergalactic obsessions and ‘shroom-inspired lyrics were instrumental in pioneering the stoner rock genre. They not only rocked, they were funny and clever at the same time. Seemingly they fell just the wrong side of fashion and the all-important arbiters of taste in the music press at the time with their retro leanings and image, despite a guitar sound that many Sub Pop bands would have killed for. Maybe it had something to do with Dave Wyndorf’s moustache?

For me, their 1995 third album Dopes To Infinity was their peak – it doesn’t have a weak track on it and is one to go back to again and again. The trippy title track is a prime example of the band’s psychedelic grunge, and the Monster Magnet cover of Five Years Ahead Of My Time was a B-side to the Dopes To Infinity single. Other than infusing the song with a crunching, precise, dials-up power, they didn’t change it a whole lot. There was no need to – it could easily have been a MM original and Dave Wyndorf and Jeff Monn sing from the same place. The cover is a worthy and fitting homage that helped to preserve the legend of a great, almost lost song through yet another decade.

Monster Magnet is still going with Dave Wyndorf as the only original member. He claims to no longer use psychedelics and, for reasons I don’t fully understand, that makes me feel slightly sad. 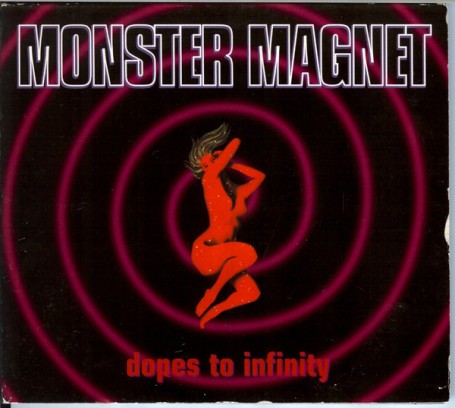