In mid-1993, Melody Maker printed news about the soundtrack for an upcoming film, Judgment Night, which would feature collaborations between contemporary rap acts and ‘alternative’/metal bands, including contributions from Sonic Youth, Run DMC, Cypress Hill, Mudhoney and Dinosaur Jr.

The full track listing was unbelievable, featuring top artists from both scenes and some of the unlikeliest combinations since Bowie and Crosby crooned around a baby grand:

The teenage me couldn’t have been more excited without involving Winona Ryder in some way.

When it was released the Judgment Night soundtrack became one of my earliest CD purchases, along with Sub Pop 200 and Freedom Of Choice. This was at a time when CDs were generally 50% more expensive than records – pretty much the opposite of now – so buying a newly-released one was a rare luxury for me.

It’s worth explaining at this point that rap rock had more credibility in 1993 than it does now, in these post-Limp Bizkit times. The earliest hip-hop had happily co-existed with punk in late ’70s New York, in seedy clubs away from the disco establishment, before Beastie Boys, with roots in both scenes, hit the charts by fusing the genres. There were several notable collaborations between highly-regarded rap and rock acts either side of that, but Public Enemy and Anthrax’s 1991 reworking of Bring The Noise might be the genre’s definitive tune. The following year, Rage Against The Machine released their seminal, self-titled first album. It’s fair to say that the early-’90s was when rap rock reached its pinnacle.

This was a time when both ‘alternative’ music and hip-hop were crossing over to the mainstream, and rap was diversifying in many different directions. It was also the time of the first Gulf War and the Rodney King verdict, and as a result, music got angrier. Mixing the expressiveness of rap with the aggression of heavy guitar music was an obvious move. Rap rock hasn’t died since the early 90s, but the likes of Kid Rock have done a fuck of a lot of damage to its kudos.

So the Judgment Night soundtrack came out at a time when rock rap as a genre was at its peak, and most of the bands involved were too, leading to an eclectic collection of unique collaborations. And it was REALLY FUCKING GOOD!

At the heavy end of the spectrum you had Biohazard playing on Judgment Night with Onyx – who at that time, on the back of their excellent Slam single, looked likely to fill the void left by the self-destructing NWA. Helmet produced a heavier than normal version of their tight grunge to back House Of Pain on Just Another Victim, which is highly effective, despite some clunky rhymes – “Feeling like De Niro in Taxi Driver, with Jodie Foster and Harvey Keitel, feels like I’m walking through a living hell”. Therapy? provided an indie-metal background on Come And Die with (the now obscure) Fatal.  Living Colour’s funk complemented Run DMC perfectly on Me, Myself & My Microphone, and Faith No More/Boo-Yaa T.R.I.B.E. provided an unexpected highlight with the brutally aggressive Another Body Murdered – “Bang yo’ head to this!”.

More relaxed offerings came from Teenage Fanclub/De La Soul and Sonic Youth/Cypress Hill, both getting gloriously trippy on their collaborations, Fallin’ and I Love You Mary Jane (maybe, MAYBE a subtle marijuana reference there?). Freak Momma by Mudhoney and Sir Mix-a-Lot was also pretty laidback. It was entertaining too, though sadly not the delicious cocktail of Baby Got Back and Touch Me I’m Sick I’d been hoping for. 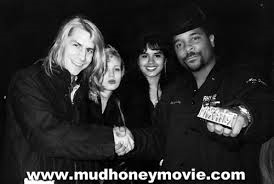 Ice-T seemed to misinterpret the brief, despite having just begun fronting his own rap-metal band, Body Count. I’d been a fan of his hip-hop since the Power album, but on Disorder, his collaboration with Slayer, he chose to shout a bad approximation of metal singing rather than rap. For me, it was the weakest track on the album.

While every cut on the Judgment Night soundtrack is excellent in its own way, Mr Marrow and friends aside, there are two tracks on it that stand out above the rest for me. The first is Real Thing, the collaboration between Pearl Jam and Cypress Hill. Now, I’ve never been a fan of Pearl Jam, but the overdriven, descending guitar riff on this, coupled with the prominent, threatening bassline blends perfectly with Sen Dog and B-Real’s ultra aggressive rap for a claustrophobic classic. From the opening feedback, to the closing “na, na, na” hook, Real Thing sounds like two acts at the peak of their powers pushing each other to give the best performance possible.

The other stand out track is Missing Link from Dinosaur Jr and Del Tha Funky Homosapien. Del is best known for his insanely catchy 1991 hit Mistadoblina (“Mr Dobalina, Mr Bob Dobalina”), and for being Ice Cube’s cousin. Among the things Dinosaur Jr are best known for is J Mascis’s guitar heroics, which are all over this tune. If Real Thing showcased two musical heavyweights coaxing each other to new levels, Missing Link is the sound of a very good rapper desperately trying to keep his head above water under a constant deluge of J’s guitar genius, as one after another, unique and brilliant riffs are casually layered over the track. With a lot of effort, Del manages keep himself heard for the duration of the song, but there’s no doubting that it’s J’s contribution that makes it so memorable.

Despite having one of the best soundtracks I’ve ever heard, Judgment Night the film is a bit of a turkey. It’s an ‘action-thriller’ in which four buddies get lost in the wrong part of town and end up – guess what – fighting for their lives. I only recently got around to watching it and it’s clear to see why it flopped at the box office. The Washington Post‘s review nails it, describing Judgment Night as ‘regrettably familiar’.

The film’s hero is portrayed by Emilio Estevez, who had previously starred in Repo Man, a great film with another fantastic soundtrack, featuring Iggy (with the title track), Suicidal Tendencies and Black Flag. He was also in Freejack in 1992, which is only notable for a hopeless performance from Mick Jagger as the baddie. In Judgment Night, Denis Leary is almost as implausible as the all-powerful crime boss, but the film’s biggest flaw is the failure to give any prominence to the soundtrack. There may never have been such a disparity between the quality of a film and the quality of its soundtrack.

So there you go, that’s Music From The Motion Picture ‘Judgment Night’ by Various Artists, an ambitious project that brought together some of the biggest stars of the rap and alternative rock scenes at a time when they were taking over the mainstream. A rock rap collaboration on this scale never happened again – it was the genre’s last stand. Then again, if anger was the catalyst for the first wave of rock rap, maybe the turbulent times we’re living in will create a resurgence; members of Public Enemy, Rage Against The Machine and Cypress Hill performed as Prophets Of Rage at an Anti-Inaugural Ball , after all. If not, then the Judgment Night soundtrack will remain a great document of when the genre was at its best. It really deserved a better film.

‘When Tomorrow Hits’ by Mudhoney, covered by Spacemen 3 – Magnificent Cover Version No.22

‘Just Like Heaven’ by The Cure covered by Dinosaur Jr – Magnificent Cover Version No. 10