The Pixies’ cover of the Jesus & Mary Chain’s Head On was released as a single in May 1991 – less than a year and a half after the original came out. As with Dinosaur Jr’s cover of The Cure’s Just Like Heaven the turning of the decade influences the musical style of each recording – the late-80s original features a drum machine and synthetic bass, while the guitars are heavier and more prominent on the grunge-era cover. But other than that, there’s not much to distinguish the two records apart from the vocal styles of the singers – Jim Reid’s drawl versus Black Francis’s holler.

Thanks to the compilation album Product 2378, Head On was The Jesus & Mary Chain song that I was most familiar for a long time. In the video, the Reid brothers looks like they might kill or cry at any moment, bringing to mind their manager Alan McGee’s famous comment about William, “He always seemed really annoyed we were imposing on his life of being a hermit in East Kilbride”.

I always liked the Mary Chain’s hedonistic original but the Pixies’ reworking tops it for me, precisely because of the stylistic changes and Charles’s holler. It was still an odd choice of second single to be released from Trompe Le Monde though; as was the first taster from that album, Letter To Memphis. But the Pixies were famous for sabotaging their own success, as can be seen by the big, MTV-averse ‘fuck yous’ their videos for Velouria and Here Comes Your Man were. 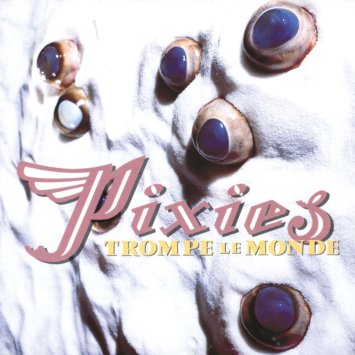 The Pixies were always more of an album band anyway. Trompe Le Monde is one of their least lauded LPs, suffering as a result of the rising tensions within the band. Third album Bossanova is similarly seen as a poor relation by fans, but I have a soft spot for it because it was the first vinyl album I ever bought when I got my first record player in 1990 and consequently it got A LOT of plays and secured a special place in my heart.

The following year, I bought Trompe as soon as it came out too, but never really warmed to it in the same way. Maybe with Bossanova, the novelty of having a brand new Pixies album made Kim Deal’s diminished role less noticeable, whereas on the follow-up there was no escaping the absence of her vocals. It’s got some great songs on it though, other than Head On – Planet Of Sound, Bird Dream Of The Olympus Mons, Motorway To Roswell – and if you listen to it in the context of the band’s last two albums, rather than their first two, it’s actually pretty great.

That said, everyone loves the Pixies no matter what and Head Carrier is pretty great too. I have tickets for their UK tour next month and I’m willing to bet that Head On gets a play.

Edit: they DID play it and it sounded incredible – Charles’s scream in person is still phenomenally powerful!