Shellac have a casual attitude to playing live. This is from their page on the Touch & Go Website:

Band information: While there is no specific coordination between Shellac’s record releases and touring schedules, you can expect the band to tour at its usual sporadic and relaxed pace.

They’re busy men, but they’ll get together and play when they can, and when they do, they’ll enjoy it.

Seeing them live, it’s obvious just how much they enjoy it. The chemistry between Todd Trainer (drums), Bob Weston (bass/vocals) and Steve Albini (guitar/vocals/living legend) is stupefying. Each element is completely locked in to the others; each one equally important.

Of course they shouldn’t be equally important, because the fact is that’s Steve Albini over there on the left. Even if you’re the biggest Shellac fan in the world, chances are that you only started listening to them in the first place because you love something he’s been involved with previously – be that Big Black, Rapeman, Surfer Rosa, Seamonsters, Pod, In Utero, or, or, or, take your pick; you’re spoilt for choice.

But after two songs it’s obvious that the Shellac machine has three cogs and each of them is vital. They blast through the intricate, angular, stop/start hardcore with total precision and power; split-second perfect on every weird time signature, start and restart. I assumed this was purely down to practise, but they play a different set every night so it can only be telepathy.

They blast through their set – Squirrel Song, Dude Incredible, A Minute, Prayer To God. People say he’s mellowed since his Big Black days, but even after all this time making punishing music, Steve continues to find new ways of wringing abrasive noise from an electric guitar, can still be incredibly intense and can still scream till his jugular bulges. Bob, on bass, takes turns on vocal duties too. Often they’ll take turns to play rhythm, while the other handles lead, regardless of the instrument. Todd occupies centre-stage – skinny and exhausted-looking – he almost looks like he’s there against his will, such is the strained look on his gaunt face as he holds everything together with his shamanic drumming.

They have an understanding and collective force that can only come from musicians who really care about and love what they’re doing and have been doing it for more than two decades.

They complement each other as personalities as well. Bob is approachable and funny and does most of the talking, fielding the regular Q&A questions from the audience, covering a variety of subjects – haircuts, trousers, Dinosaur Jr vs Sebadoh. Steve is happy to stay on the sidelines for this but chips in occasionally with a witty remark – insisting that no one should feel obliged to buy a t-shirt because ‘you’ve done enough’. Todd stays silent, but gets involved from time to time to give a comic shrug or to give a twirl when Bob confirms him as the ‘sexy one’ in the band.

They’re playful during the songs too. One (incredibly loud) bar into their opening song they stop and freeze, apart from Todd twirling a drumstick in slow motion, for close to a minute before resuming in unison as if nothing had happened. During the drum break on Steady As She Goes, Bob and Steve run and hide behind amps at the side of the stage, leaving Todd on his own. And as the last song – the awesome Spoke – closes, Steve and Bob dismantle Todd’s kit, piece by piece until he’s left just hitting a snare. Then they wave goodbye.

It’s great when you come away from seeing a band a bigger fan than you were before. They put on a tight, loud and intense show while giving a new dimension to familiar songs, having a blast themselves and being genuinely funny. Albini got the biggest laugh of the night, telling the Birmingham crowd, ‘You have a beautiful city’. But he went on to explain:

“Beauty is only skin-deep. Think what you’ve given to the world. I’m talking about Black Sabbath.”

That got an appreciative cheer. Most people there weren’t born when Sabbath were at their height, but still, it was heart-warming to hear one legend paying genuine respect to another. In fact that’s what the whole night was – heart-warming – which I wouldn’t have expected beforehand. So yeah, maybe Albini has mellowed. 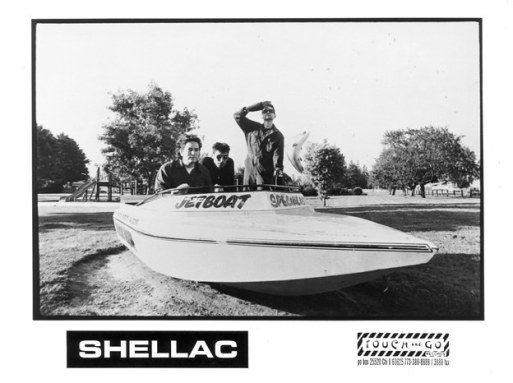